Two Weeks With the Galaxy Nexus

After having my Samsung Galaxy Nexus active for just over two weeks, I wanted to write a follow up on what I do and don't like about the device. Most of the following has already been discussed at length on various tech blogs and sites, but I wanted to offer my own personal opinion as well as a few things that may not have been mentioned.

Probably the number one complaint that you'll hear about the Verizon Samsung Galaxy Nexus is it's abysmal battery life. Unfortunately my experience has completely verified this, and while there are ways to make it last longer, compared to my OG Droid and other phones out there it really missed the mark. From my experience it is the 4G LTE that causes the biggest power draw, although form looking at my battery stats Android OS is usually the biggest consumer of power. It seems though Android 4.0.3 (phone is currently 4.0.2) is suppose to address these issues and hopefully it rolls out in an OTA update soon. Flipping over to CDMA only also improves battery life dramatically as many sources have already noted. 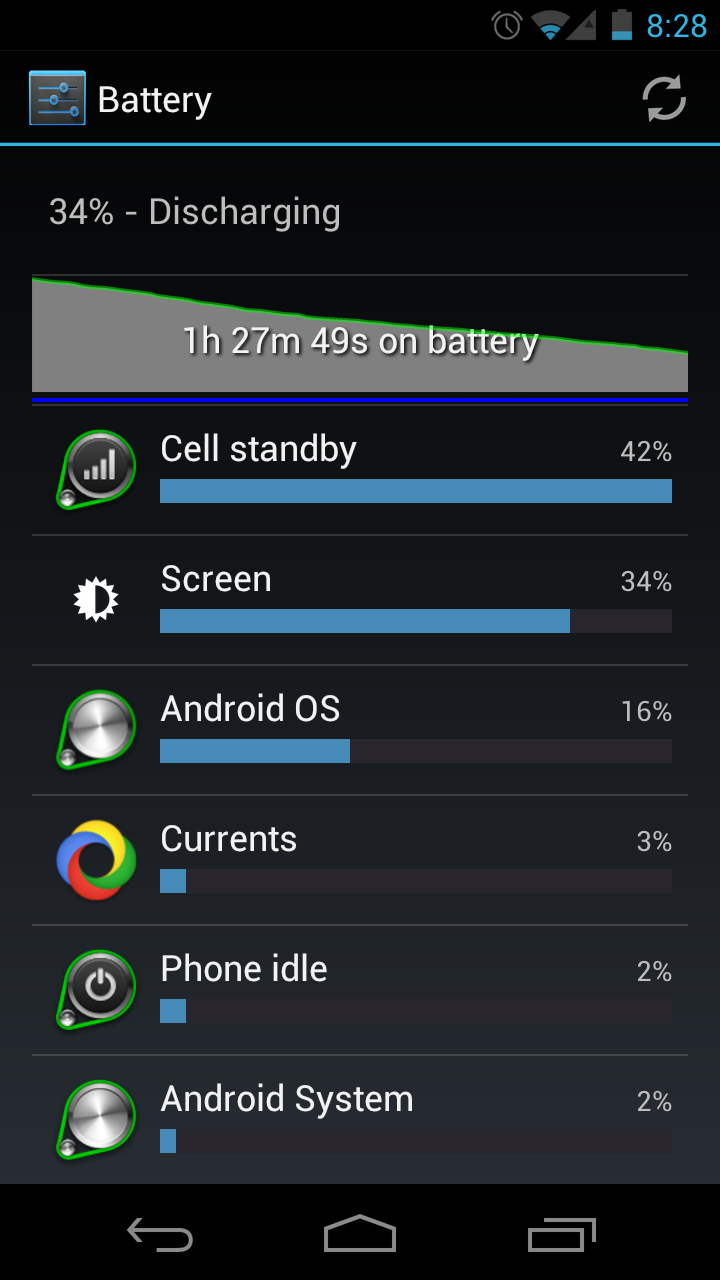 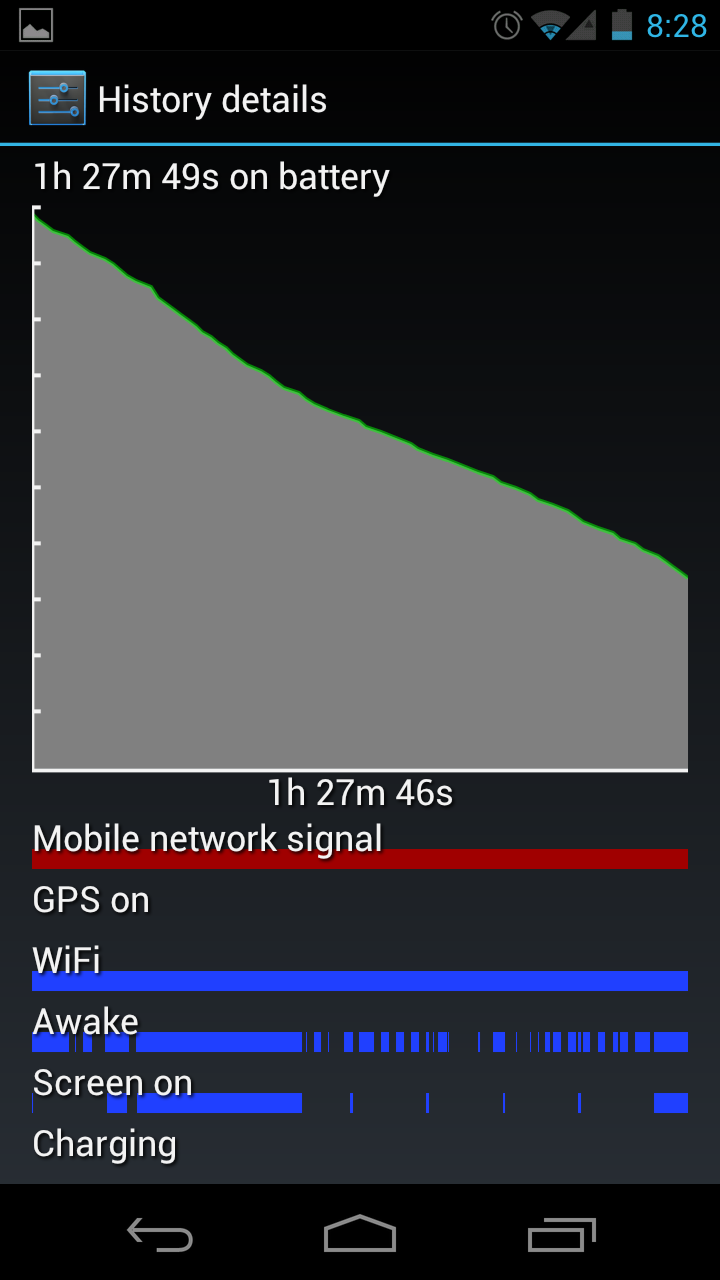 After using ICS it's almost impossible to go back to Gingerbread or Honeycomb. Probably the strangest thing is using my Honeycomb tablet which looks similar to ICS but then lacks many of the features I've started to get use to (application button, app folders, etc). The biggest complaint I have though is I randomly hit the soft keys more than I though I would. This usually happens when typing a text message out and I miss the space bar, instead hitting home or back. Thankfully most messages are auto-drafted and I don't lose any work, but it's still frustrating and interrupts the flow. I can't think of a better way to do this though other than practice, or maybe making the buttons have a larger gap between the soft keyboard.

Using the OD Droid QWERTY keyboard for the last two years really spoiled me on not having to use the soft-keyboard and it is probably the biggest feature I miss from my old phone. It wouldn't be that bad if it weren't for two things. First I seem to mistype very fifth letter, requiring me to correct a word or do a suggestion. This you can attribute to a newbie with a soft-keyboard though. The second, and this is definitely not a newbie thing, is the bug that happens when in landscape mode. If you turn the phone sideways and try to use the landscape keyboard, it becomes slower and slower the more you type in it. This is not just me, but a known bug that hopefully is addressed soon.

The phone also likes to lock up and reboot randomly. It doesn't happen constantly, but sometimes I'll take it out of my pocket, fully expecting the normal fast and responsive UI, only to wonder why it's not turning on, and once even having to remove the battery to completely reset it after it froze. This seems more like a software issue as well which I'm crossing my fingers for a fix soon.

In combination with the poor battery life, it seems it also occasionally with not charge correctly. I noticed this last week when plugging the phone it on my desk, walking away, then hearing the "disconnect" beep. Re-plugging it in seemed to work, only to beep when I was five feet away again. Repeat this dance about five times in a row and begin to realize if you have a bum device.

LTE is amazing, but unfortunately doesn't always work, which also seems to affect 3G and just phone service in general. I can't count how many times I've seen no bars or tried to load up a page or make a call only to get the "No Connection" window, sometimes even having to reboot the device to get it to come back at all. The battery stats app shows LTE is constantly dropping in an out and there are long periods of "no connection" at all, especially in my house in San Diego. I attribute this to Verizons newer LTE network though and believe it's just growing pains. LTE is if I flat out fantastic when it does work and I've found for a reliable and solid connection flipping over to CDMA only does the trick.

The camera is probably one of the best features of the phone, even though it lacks some of the higher resolution that other Android counterparts offer. The zero shutter lag is something I instantly became grateful for and it's good to know in less than 5 seconds I can have my phone out taking a photo where with other devices I'd still be waiting for the app to load. The time-lapse and panoramic features are a great addition as well and I've found myself experimenting with them in a variety of different ways. The built-in editing software is nice too, but I haven't had much experience with it yet.

This thing is fast. Opening apps is almost instant and I know when I pull it out (if it isn't frozen/crashed as mentioned above) I can do exactly what I want to do in record time.

So many things have been said about the screen it's hard to say much more. Surprisingly after comparing it to a HTC Rezound which is suppose to have a better screen the Nexus far outshines it.

I know it's a small feature and most people will overlook it, but the "Request Desktop" feature baked into the web browser is great. Sure there are apps you can download to change the user-agent or use a different browser entirely, but having it two clicks away with no additional hassle is great. At first I didn't think I would use this feature that much, but I use it automatically now whenever a site puts up one of those limited "mobile" sites that hides most of the features.

Sure Google Wallet it's officially supported on the phone, but that doesn't mean you can't install it still. After installing the modified apk I am now able to make purchases using a Google Pre-Paid card. It has an option for a Citi Mastercard, but since I don't really need another card I haven't set this up yet. I have used it a few times at CVS though and it's fun to see it pay just as fast a a credit card and make a nice charming beep when it's completed the transaction. I hope that more cards are supported soon and then I can start using it as my default payment device.

So after all these problems am I still glad I have a Galaxy Nexus? Heck yeah I am. There are times where I cannot put this phone down, sure the above are pet peeves and obvious bugs, but the overwhelming ability and functionality of the device more than make up for it. The good thing too is most of the issues listed above seem software related, and the bug reports listed with Google have a good amount of visibility. Once Verizon gets it's newer LTE network in order too this phone will be a juggernaut of Android phones in the next year.